Gojō (the five virtues of an ideal person)

As we continue through another year of training, I think it best to again place a philosophical point in the forefront of our minds. As we know, our training is as much about improving our minds as our bodies – this in in turn enriches our lives! So, let’s continue working on our minds in conjunction with the sweaty stuff inside the dojo!

Again, I want to acknowledge that in this article I am blending some of the ideas of Swiss martial artist Pascal Krieger[1], concepts taken from Master Gozo Shioda’s[2] writing, thoughts from AiShinKai founder Dr Jonathan Bannister[3], traditional Japanese martial artist Donn Draeger[4] and many of my own beliefs and experiences training under Michiharu Mori Shihan. Despite this article being, in many ways, a continuation of the last article on SHU HA RI in its theme of self-development, it does stand alone and is able to be read without first reading the previous article. So, let’s continue on from where we left off, or perhaps even begin…

Who am I? And more importantly, who do I want to become?

Who we are is usually determined by our exposure to the ideas of others and one’s own experiences throughout one’s life. Much of who we become is a blend of who we are and the decisions we make throughout our lives – the collection of decisions that combine to define our character. But what informs these decisions? In short, it is our value system, our morals.

For those that train in traditional Japanese martial arts, the value system or moral code is often referred to as ‘bushido’, or in European terms it is often equated with ‘chivalry’. Bushido is a moral code of conduct that is the amalgam of Confucian morality (more than 2500 years old), indigenous Japanese values and the influences of Zen Buddhism in the 16th and 17th centuries. In Japan, this moral code has a sub-set of qualities called the ‘Gojō’. If one aspires to live their life by these five qualities (even in contemporary times), one is said to be in search of a cultivated and honourable life. These are values that are human by their very nature, and therefore, do not age or become irrelevant, but of course they can to be contextualised to a new time and a new place.

The Gojō is a set of human qualities that make a true person – in the most noble sense – of those who cultivate them. They were originally designed to promote good social and political relations between people in China who seemed to have been split into noble men (Jun Zi) and men of little consequence (Xiao Ren).

These qualities are so important that they naturally represent goals for all trainees in the traditional Japanese martial arts – Budō. These qualities are interdependent; they rely on each other for moderation so that they keep their real value to our lives without being altered by intolerance or slackening. It is when we first enter the dojo and are exposed to expectations that make us feel uncomfortable and inadequate that we first glimpse these ideals; we reveal our true selves and start to realise that we clearly lack many of these qualities. This is okay and purely natural. Therefore, it is fundamental that we persist in training externally to hone our skill on the mats, but also internally to become the best version of ourselves. Let’s now discuss these five qualities. 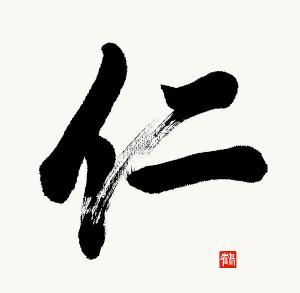 Jin, or Nin, is not human kindness handed out drop by drop. It has nothing to do with love or the kindness that is restricted to a closed circle of relatives. Nor is it a civilization whose specialisation and “respect for the private life” have finished by cutting us off from one another, ‘everyone in a partitioned compartment of society in which smiling to a stranger has become suspicious.’[1]

Jin, or Nin, reflects the state of mind of a person who has accepted the universe as it is and seeks to be in harmony with it, rather than seek to change its inevitable flow – much the way we seek to harmonise with uke in aikido to avoid unnecessary conflict or clashes that result in irreversible destruction. Having transcended passions, divergences, differences, one ideally has become like the sun that brightens and warms everything it touches. 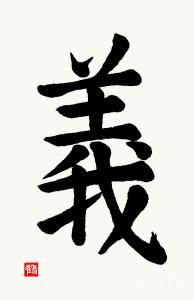 Tempered with an injection of Jin (Benevolence) and blended with Chi (Knowledge), Gi aspires to entail a sense of universal justice. ‘Justice’ in this sense is a natural phenomenon where one seeks to understand with one’s heart rather than brandishing the scales and sword of good and evil. Instead of an imperfect system of judgement that can be manipulated by a powerful few, Gi leads the righteous one to an objective justice that views each case in isolation and in relation to universal principals.

Rei has nothing to do with following blindly the ways of others or meaningless kowtowing which so often presents itself as nothing more than hypocrisy – not acting in truth or being true to one’s actual intentions.

Rei is the notion of Etiquette in terms of an unspoken language which allows us to express our respect and consideration for others. Each detail of one’s Etiquette must come from the heart – then we know it is influenced by the Universe, or fundamental laws of nature. Rei emanates from the person who possesses it and applies to everything around him/her: it is applied to people without distinction of rank, race or sex, animals and things [1]. A tree deserves the same respect as an animal or human being since all are part of the same Universe, and are subsequently governed by the same universal principals. Perhaps our original Australians understood and practiced this concept better than any other society or civilization – better than our current western civilization when we consider our treatment of the natural environment currently. 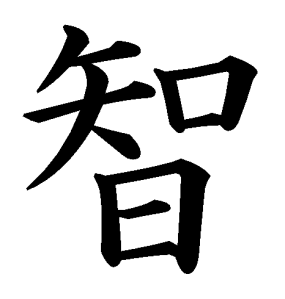 Chi is not Knowledge that is worn like a badge of honour. It is not Knowledge that feeds the ego as an outward manifestation of narcissism which results in selfish motivations behind any further actions undertaken. Today in this age of media, and more specifically social media, our minds are flooded with information from which misconceptions are made of what knowledge and truth – reality – actually looks like. Ask yourself, when was the last time you saw something mundane or representative of day-to-day life on the news or on Facebook? Or when was the last time you were presented with information that gives you a deep understanding of something within a wide field of vision – something that gives you an ‘overall view’. It doesn’t happen. It doesn’t happen because Wisdom comes from one’s own experiences within authentic situations and interactions with genuine people who carry real emotion – nothing fabricated to inflate one’s ego. True Knowledge is acquired not given, it is co-constructed not self-absorbed, it is considerate of the broad context and it is indivisible. It invariably links the slightest detail to the universal principle, and this principle to the whole Universe: All is one.

The final quality is our Trust, our Shin. But it certainly is not the least important as all five qualities are interconnected and do not sit in isolation but truly complement and enhance each other. 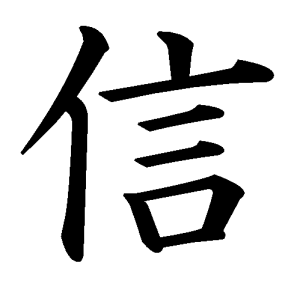 The sense of trust espoused in the Gojō is often not found in contemporary society anymore. We have replaced it with binding documentation and written agreements that protect us from false promises because we ‘need to have a back-up’. A handshake and the verbal promise do not weigh heavily against a signed piece of paper that automatically becomes a threatening weapon. Integrity is lost in this sense; the promise has lost its meaning and trust seems to have practically disappeared. Why do we only extend Trust to our closest acquaintances and family? When not extended freely to all, does it not place us within a MAD (mutually assured destruction) situation similar to the nuclear standoff throughout the Cold War?

If Trust (within the context of all five Gojō) is not granted freely, we accept a climate where widespread breaches of faith are the norm. Therefore, we prepare for this. We produce binding agreements that restrict occurrences of broken promises or deal out punitive consequences for the person lacking integrity. It essentially becomes a race to the bottom where everyone is protecting themselves against a negative human trait, a lack of ‘integrity’. But what if we were to trust feely? What if we were willing to accept that the collective conscience of society was strong enough to move people to fulfil their potential: to act and think with integrity, honesty, and loyalty? Now I am not so naive to believe that our world will tomorrow dismantle the legal system and that business will be conducted free of contractual obligations. But what I am suggesting is that what we study in the dojo is more than self-defence, it is self-development of a holistic type. Yes, it is development through hard physical training, but it is the mental and emotional development that will sustain us beyond the four walls of the dojo in a society that often seems fervent on eroding the Gojō in place of self-interest. Our relationships are what make us human. Therefore, when we interact with others on the mats in the dojo, we are practicing relational discourse of the highest level: to grant someone love or compassion when they come to kill you![2] Pure harmony on the mats is only attainable through dedicated training with a heart that embraces the Gojō, and true harmony in the world outside the dojo is only possible once achieved within it.

So, I place this challenge to you in response to the earlier question, ‘who am I and who do I want to become?’… as we continue our study in the dojo this year, “place the Gojō in your heart.” You may want to begin with Shin: people who will never break their word nor will they betray someone’s trust. People who place their dignity in the trust they inspire both from strangers and their most intimate friends. Trust in the goodness of others, free of the fear of dishonesty and you will go a long way to eliciting the best out of people!

Finally, as a further example of the interconnectedness of Japanese culture, etiquette and budo, the Japanese hakama (pyjama looking baggy black pants) symbolise the Gojo (five qualities) in their pleats. Each pleat represents a different quality of the Gojo as you can see in the figure below.

The front five pleats are symbolic of the five qualities of the Gojo, while the two pleats at the back support the five with Courage and Honour – two qualities indicative of the martial way. Therefore, one cannot train in the traditional Japanese martial arts without constant reminder of the need to be the best version of oneself – to fulfil your greatest humanity!

In summary, these qualities are not exclusive to Japan or Japanese culture, nor are they new concepts, they are human traits of old. This is probably best reflected in the old Cherokee fable ‘Two Wolves’ (see the fable below on the following page). So… let’s return to the opening question in light of this now. Let us constantly ask ourselves, ‘who am I? And more importantly, who do I want to become? Which version of myself would I like to feed and nourish?’